Ribs Nsfv (not Safe For Vegetarians)

Generally I have vegetarian meals as Isobel is a veggie and it doesn't makes sense to cook two different things. It isn't because I can't have meat, I could if I wanted. When it comes to a Saturday night Chinese then ribs are on the menu for me. After trying various rubs and sauces which were OK I now just use a Jamaican jerk rub. It basically consists of allspice and scotch bonnet peppers plus garlic, onions, sugar, ginger and salt. You can have cinnamon and a few other spices but I prefer just the others.

I marinate the ribs for a day or so in the spices and then cook in the oven for 90 minutes at 180°C.

And yes I realise that they are not Chinese by any stretch of the imagination! 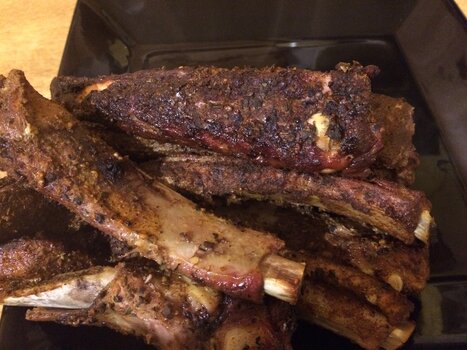 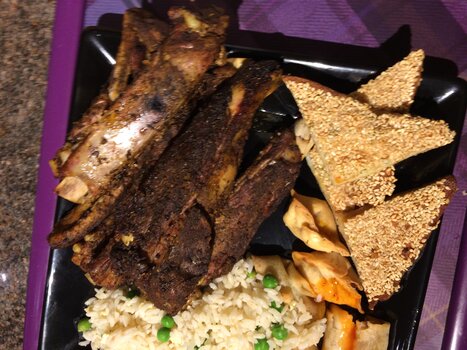 Do you put the spices together yourself or is it pre mixed? If it was some stoned jamaican offering you herbs "for the ribs" you might have done it all wrong lol

Originally got a jar but have since used home made. Had most of the herbs and spices in stock. Not keen on some of the more floral spices. Need to make another batch and measure everything so I can repeat it.

Was a while before I realised smoking weeds out of the garden wasn't having much of an effect, except from removing weeds from the garden!

So I've cooked a load of ribs tonight but I boiled them slowly first in a Pork stock with paprika and salt pepper and garlic for 1 to 1.5 hour. Then proceeded to make a sauce
from HP smoky barbeque sauce, smoked paprika, tomato puree and salt n fresh ground pepper plus loads of sugar.
Put the oven on 220c or equivalent gas mark and coat and cook until they start to blacken around the edges
I can assure you they will be so tender words will not describe
Reactions: glenwilson

Added to my recipe book!
You must log in or register to reply here.
Look at the NEW NRU Merchandise Shop to order your own T-bag Coffee Mug or your NRU T-Shirt. Also special Coffee Mug designs for VIPs