I see that Germany has just published ethics guidelines for self driving cars. I'm glad that if there is a choice between hitting fat guy (less damage to car) and skinny guy (less padding) the odds are equal. Link to full doc at the bottom.

What is troubling is that laka's car would have a team kill override. You could imagine the logic... 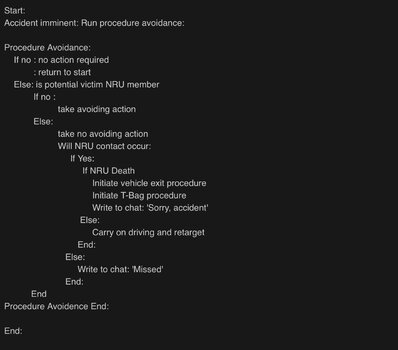 I saw the news article this morning about WiFi controlled trucks being used here...
I'd assumed we already had those based on the average truckers time spent using their phone at the wheel
Reactions: glenwilson

What can I say about that, well still I will be a fan of normal cars...also the thing Tedd said about truckers who spend their time on phones, hmm that's discussable cuz also most of the car drivers do the same, that's not a huge difference + new trucks have the autobraking system and distance control, I'm not trying to protect trucks just cuz I love trucks and I have driving license, I mean the point is that not only truckers make mistakes but also cars, the biggest issue is when the damn car drivers don't understand that we need much more time to stop the truck than you with cars, but still this is a major problem of using mobile phone in all vehicles and it's hard to fight against it, there are rules there are punishments but still there will be idiots who will do it just like there are drunk idiots who will drive even tho they can't walk straight, I don't care if they kill themselves the problem is if they kill whole family I know how I do it, while driving no phone, I can answer to a call but put bluetooth connection and talk without having the phone in hand and also no alcohol when I know I will drive it's easy and I'm sure more secure than those self driving things. And also when they catch people doing that, the fine should be much higher especially for those who are driving while being drunk. But still It's my opinion, I'm maybe wrong....

glenwilson said:
What is troubling is that laka's car would have a team kill override. You could imagine the logic...
Click to expand...

but seriously, in reallife my ( business ) car have any kind of driving assistants with distance control, selfbreaking and speedup control and a lane keeping system what also can steer my car for a short way/time. it feels realy strange if you have your hand on the wheel and you feel the car is taking care and doing some correction to your driving and hold you between the lines. but i also appreciate this technic and will not miss it anymore. not only for savety reasons.
Reactions: glenwilson

lakaelo said:
lmao i don´t know why i always have this kind of accident if i drive with my fellow teammates

but seriously, in reallife my ( business ) car have any kind of driving assistants with distance control, selfbreaking and speedup control and a lane keeping system what also can steer my car for a short way/time. it feels realy strange if you have your hand on the wheel and you feel the car is taking care and doing some correction to your driving and hold you between the lines. but i also appreciate this technic and will not miss it anymore. not only for savety reasons.
Click to expand...

I would wait until the 2.1 version of the software. Plus if it was done by Google your car would be too old to get updates after 18 months!

Why a self driving car?

I love driving cars, but suck as a mechanic.
I test drive every car i get a chance to test. My favourite test drive so far must be the Aston Martin DB9, even if it not the fastest or pricy car i tested. Was just something with the DB9 that still gives me a smile when i think back.
Reactions: glenwilson

Never been in an Aston but nearly all are cars that you would never tire of looking at. Jealous of you now.

Yes, driving is fun though with the introduction of speed cameras and the number of people with cars it is less so. We used to love jumping in the Mk2 Gof GTi and driving off to Mull or Skye for the day. 200 mile round trip on deserted roads. Most I have driven in a day - about 700 miles (1200km).

You of course make a fine point Andrej - I was being a smart ass . It's a concern no matter what the vehicle if the driver/ rider does not have their attention to the road.
We have the utmost respect for skilled and safe drivers of large vehicles, we towed/ toured a twin axle caravan about for 2.5 years a while back, with a large van. It certainly made us appreciate considerate drivers, of whom there seem to be fewer and fewer.

I'm not sure what it's like in your part of the world, but my wife and I are noting more and more that we see trucks cross t he white line, swerve, near miss, etc. Looking at them as we pass (at least 1 lane width wide of them!) it's quite shocking what you can see. i.e. driver with elbows on the wheel, using both thumbs to 'control' their phone!

I imagine this is an example in most countries. An argument for vehicle automation perhaps?

I saw a report just this morning that had me thinking. A legal specialist was describing how currently the law defines 'whomever is in control' on the vehicle as responsible for an incident involving that vehicle (i'm simplifying of course). The question being raised as who is liable if a vehicle is automated, driver, car manufacturer, software writer..? if you were involved in a collision with one, which would you bring legal action against?

They were testing automated vehicles in Switzerland for an insurance company, on a military base. Essentially trying to figure out how automated vehicles would affect insurance. What it did illustrate though how do you write software effectively makes life and death decisions potentially. The example was a quad bike, illegally overtaking a car. Another car was travelling in the opposite direction towards the car/ quad bike. In this case a collision was inevitable, not enough braking distance to stop any of the vehicles involved. Does the software tell the automated travelling toward the car/ quad bike to: apply brakes, knowing it will hit the quad bike, risking death of the quad driver? Or does it brake, swerve and hit the car, potentially reducing the risk of death as car/ car impact is statistically less likely to result in death?
If it were the second option, this raises several questions, I guess the most basic being who is worth the risk? Also, it asks the software to make a decision about risk based on the information it is aware of. What it may or may not be aware of is if the car/ impact would affect vehicles travelling in the same direction as the car/ quad bike, just behind them. If the car/ car impact occurs, then would this result in risking further cars/ bikes/ lorries/ whatever potentially colliding with the resulting incident.

Personally, it's making my brain hurt. however, it does make me wonder what's better, software with maybe some ethics that we don't all agree with, or people, fully in control, potentially drunk, on drugs, playing with their phone, angry, talking, tired, ill...

Anyway, I'm off to shoot some virtual soldiers... a healthy pass time for any adult male

When I was a lot younger it was always young males that were the risky drivers. Nowadays I see so many awful drivers at all ages, gender, and races. Numpty driving seems to be completely inclusive. Too many seem to miss the point that they are in control of something that has the ability to kill or injure a lot of people. Motorway driving brings out the middle lane campers (I really wonder how the get off a motorway if the are so scared of the inside lane) and those that just don't concentrate sufficiently. The number of times you do see people using their phone amazes me. If you get banned for drunk driving and using a phone is meant to be worse why isn't that an automatic ban too. I think some people should have their licence revoked permanently for some offences like drunk driving or causing a death.

I'm not claiming to be a perfect driver but I certainly aim to be. I try to anticipate what could happen and drive accordingly - that doesn't mean being slow.

samoz83 said:
Oh looks like no one is on my side of trusting them haha
Click to expand...

i am with you sam. just forgot to vote lmao

The biggest issue is when humans (though I have my doubts about some drivers ) drive v humans there is a certain amount of anticipation about what others are going to do. If you add autonomous vehicles in to the mix you won't have the same instinct. You can often tell that someone is going to turn by positioning in the lane but you won't get that with AI as it will follow the lane exactly. Plus if you have Apple, Google, Audi etc all doing there own thing how the hell will they interact?

I know it sounds strange, but i make my living driving special transport semi trucks carring gas,gasoline and other hazard goods and see all idiots on the roads.

Had a thought. Passenger aircraft could fly without human pilots yet they still have them. In the event of system failure a pilot can think of solutions that an autopilot cannot. There are many occasions where pilot skill has enabled survival because of abstract thinking.

Yeah but they're trained for years, normal humans are pretty stupid
Reactions: glenwilson

samoz83 said:
Yeah but they're trained for years, normal humans are pretty stupid
Click to expand...

I played Flight Simulator for a while and I landed a Boeing 757 (admittedly a British Airways simulator) so it isn't that hard.

But we are not normal! As laka said in another thread we are "special".
You must log in or register to reply here.
Look at the NEW NRU Merchandise Shop to order your own T-bag Coffee Mug or your NRU T-Shirt. Also special Coffee Mug designs for VIPs