Just create a poem about Trump and Putin!

Trump was in the EU a wanderin'
Looking for someone who would support him
So he reached out a (small) hand
But the Polish lady declined
Later he saw his best pal
Vlad asked him to give him a call
Later that day the Donald lifted the receiver
But the line was engaged forever
All he could hear was Pee Pee Pee Pee Pee
Last edited: 7 Jul 2017
Reactions: lakaelo

Fake news. Agata Duda first hands Melanie Trump and later Donald Trump. The fact that she did not hand Trump is a fake news spread by the left media.

Next time I would recommend watching no BBC or CNN just some normal, independent media
Reactions: tousledmonkey31

ulthart said:
Fake news. Agata Duda first hands Melanie Trump and later Donald Trump. The fact that she did not hand Trump is a fake news spread by the left media.

Next time I would recommend watching no BBC or CNN just some normal, independent media
Click to expand...

Yep. Protocol says that she should shake hands with the First Lady first and the with the Trump. She followed protocol. Trump should have (and probably was) briefed on that but judging by his expression either forgot or wasn't listening at the time.

The trouble is that the Trump has created his own situation where White House staff try to justify blatant lies to the point nothing is accepted as true. They have more in common with fantasy fiction. The tweet below is a good example.

Podesta had nothing to do with the DNC he was only with the Clinton campaign team. He therefore couldn't refuse to give the server to anyone. It also wouldn't have anything to do with the CIA who only spy on foreign soil and why would the FBI want the server. Finally no one had any reason to talk about him. So why would you suddenly drop a tweet like that? Distraction probably because of the G20 meeting. The Russians didn't hack the actual election. What they did is hack the state voter registrations to deny people the ability to vote. Why would he raise voter fraud prior to the election unless that was a mistake? And why would he continue to raise it when he won?

I doubt they will impeach the Trump anyway. It will be a monopoly moment, go to jail, do not pass go....

The BBC video shows that she shakes his hand afterwards?

All sources need to be checked before taken as truth. The bottom picture is the original unedited Associated Press image. Putin added and the name plate changed too. We all have to be careful as what we accept as being original and what the motives are for the post or publication and any agendas they may have. 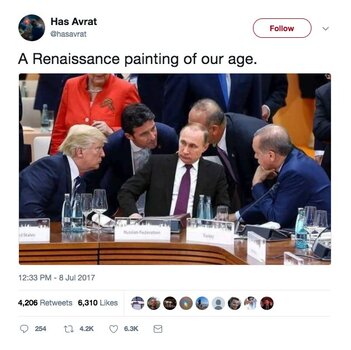 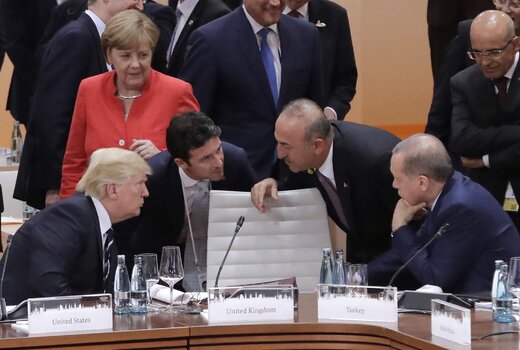 samoz83 said:
The BBC video shows that she shakes his hand afterwards?
Click to expand...

BBC and CNN are fucking fake media. In Poland we have so many fake media, TVN, POLSAT, Gazeta Wyborcza. So many times they showed a lie that the Poles stopped watching them.
Fortunately, we also have independent media that show the truth

I hate this term fake media, all media has a bias and an agenda...

Look at Trump for example, calls any source that disagrees with him fake media but pushes sources such as Breitbart News.

Any media company that has to profit has to be looked at with sceptical eyes. As with scientific studies sponsored by, say wine producers, you have to look at the results with that in mind. State run media has to be treated in the same way too.

In the U.K. the mainstream media like the BBC has an obligation to be neutral politically. They also do investigative work that can highlight all sorts of things including governmental issues. Whilst not being perfect and whilst trying to be neutral I don't think they always achieve that.

Printed media in the U.K. Is awful. The Express and Mail "newspapers" are so biased it is embarrassing. The quality of, and I hate to use the word for them, journalism is awful. They aren't quite fake news but they are just shite. The likes of The Times and Guardian are probably more respected but not without their own faults and bias.

In the US you have the extremes. Fox and Brietbart for example are pro Trump and in there eyes he can do no wrong and never question him or challenge anything he says. You then have the likes of CNN etc. who do challenge what he says and because they don't agree with Trump have become fake news. In the US, a lot of the independent media seems to be progressive leaning towards the democrats. So there doesn't seem to be a mid-ground, it is either left or right.

Recently CNN retracted a report that was factually wrong. That is the right thing to do yet were taken to task over it. Fox however, are just a cauldron of ignorance and I honestly find it disturbing that Trump believes what they say if he is so intelligent. I forced myself to watch Fox and Friends a few times in order to have my own option rather than take others views. The racism, sexism and so on would get Fox banned if they played BF4!

Nixon did the same sort of thing and it didn't go that well for him. Media has changed but what we are seeing is a lot of the current administration using the same sort of tactics. It won't go well for this administration either.
You must log in or register to reply here.
Look at the NEW NRU Merchandise Shop to order your own T-bag Coffee Mug or your NRU T-Shirt. Also special Coffee Mug designs for VIPs