Not long now until our next holiday. When you get to our age birthdays are no longer really significant except that your body seems to know and things start to wear out. As this year was a 'milestone' birthday for Isobel we thought we would start to see things that we really want to.

We have exhausted most of the things we have wanted to see/do in the US. There are still things to see and places to go like Alaska and a few cities but nothing that wouldn't involve either a LOT of driving or a lot of city hopping.

So where to? China was the first choice as Isobel has always loved pandas and wanted to go and see them in China. It isn't really somewhere that you can be an independent traveller so you really need to do an organised tour. Most of them could easily be described as a BF4 China Rising location tour (with Pandas). You can do panda tours which involve more time at somewhere like Chengdu where you can also be in with the pandas rather than just looking at a distance. Yes that costs £££ but I think it would be worth it for Isobel to experience that. We have done similar things such as the lions and tiger program in Mauritius. Wouldn't be impossible to do but it probably needs a bit more time to plan.

Another place was Namibia for a safari. Again it is probably too short a time (not impossible) to get sorted and also it isn't the best time of year to go.

So where to go. One of the original ideas was to go to Germany and explore there. We then thought about doing a round trip from Munich to Venice to Zurich and then back to Munich. I usually use Microsoft's AutoRoute and Streets and Trips to plan European and US holidays as it is much easier to use than GPS software. It enables you to get a good idea about distances and rough routes. So I added the places in and got the route below!!

If we followed this route it would be over 1600 (not including the ferry!) miles instead of 800. Would also include countries:

The obvious route would be to come back via Innsbruck. Despite looking like an interesting route it isn't something we will be doing.

So after starting to investigate this route and what to do and see Isobel then says "What about the Hurtigruten?" 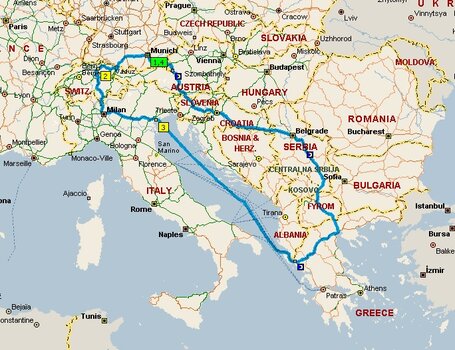 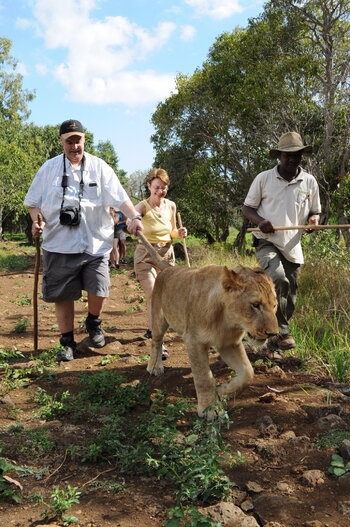 hurtigrouten would be my choise too. that something i will do in the future.

To be honest I think the boat trip looks much more relaxing and is what Isobel could do with.
Reactions: lakaelo

Watching Norway’s beautiful landscapes either on deck or on shore excursions – that is what I’d opt for, too!
Holidays are a time to switch off and relax - I think the European trip is far more stressful.
The Hurtigruten Coastal Voyage just sounds perfect.
At least for me.

Thanks! I agree that the Hurtigruten would be ideal. I have skimmed the video and will watch properly a bit later. The main trouble is that Isobel hasn't had that "I really want to do that...' moment yet. She is really hard to please. She wants somewhere to relax, but wants to go and see things, but not to stay in the same place for too long, but doesn't want to travel to to much(!), it would be nice to be warm (we have been jinxed with weird weather recently) but would also like to see the artic, but doesn't really want to travel in/with a group but... you get the idea. Someone who is a travel agent's worse nightmare. I give you one guess as to what she does... I'll wait.

A cruise of some sort seems to be the best compromise as you travel without moving hotels, most facilities are to hand and it should be relaxing.

We will see what we end up doing.

Hurtigruten seems to be a good choice given the various requirements and hopefully a summer trip won't mean a huge risk for windy conditions i.e. unpleasant moments.

For a less epic but wave-free voyage you may also consider this: Göta Canal - Startpage

Hope you get your plans finalized soon .

It will be early September. The only time I have been 'seasick' was in Barbados when we were on the Jolly Roger and I suspect that had more to do with drink and the sun than the motion of the boat. A canal cruise was also something we thought of. Would love to do the Galapagos but the price of the cruises there looks as though you should buying the boat!

I like the idea of a fjord cruise as it has been awhile since we have had a holiday and we haven't done about 1,500+ miles (2,500km) of driving - it would be nice to see the views (Isobel doesn't drive). There are some we could get from Southampton that would mean not having to fly which would be nice too.

I don't mind flying but all the security stuff and limited baggage becomes more of a hassle than a pleasure. I remember when you could do Edinburgh to London which allowed a walk-on no reservation service with a "guaranteed seat" — this meant backup aircraft so you could be the only one on the plane! Used that a few times- think it was about £50. When we moved up here I used to still fly down to London to watch Fulham.

Remembered that I also went on the Heathrow-Gatwick helicopter link (below) a few times. Cost £12 each way. Real shame there weren't the cameras available we have now as I would have so many photos of adventures. When I worked at BA, after the last night shift in the rota (we did 6 on 4 off) we would just choose a place in Europe and fly there for lunch (if we could get on with standby). 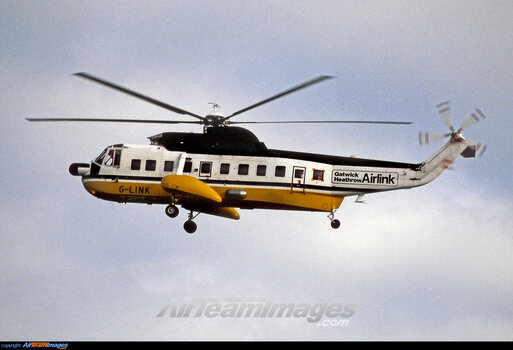 Isobel has a mole that needs to be looked and has been referred to a specialist for further diagnosis. At this point we don't know if it is serious or not though the odds are more in favour of it being OK than something more sinister. Whilst the cruise option would definitely be my first choice we are now looking at going back to the US! Currently looking at Boston to Montreal to Bangor (Maine) and back to Boston. Leaving it late but with the uncertainty of Isobel's health we will just plan at the moment and book if things are OK or we know more information.

Good luck with your plans and fingers crossed re that mole.

finger crossed with the mole.

Thanks! Appointment is on the 8th and hopefully it will be nothing.
Reactions: samoz83

That's what I hope for, too.
Please give my best regards to her.

Thank you and will do. The doctor suggested a couple of things it could be and whilst there is some risk it is relatively low. Still needs to be checked though and it has been adding to the stress of work.

The doctor said Isobel's mole is actually a cyst but it does need to be cut out. That is a relief.

We had been holding off booking anything just in case. We had looked at going to Maine and Quebec but it is really the wrong time of year. We then looked at flying to Newark and touring down to DC (to wave at Trump before he gets removed or resigns. My money is on a resignation and then a prosecution for money laundering, racketeering, human trafficking). In a few days the price of flights just shot up to stupid prices even for cattle class.

Would recommend Washington DC though for all the museums, Library of Congress, the Capitol Building and the Pentagon tour. Nearly all are free.

Earlier in the year we had thought of touring Germany and that is what we will be doing. Ferry to Amsterdam and then drive down to Bavaria stopping about halfway going and coming back via Austria, Switzerland, Belgium and possibly Lichtenstein.

We still want to do the Hertigruten cruise and many of the other suggestions. So the ferry is booked, we just need to find some hotels and a rental place now. And pack...

good to hear its "just" a cyst. guess that make things easier now

tour sound nice and interesting but a lot of driving for you. but advantage is you can makes stops at every interesting spot on the tour.

oh and if you looking at some hotels. feel free to use my booking.com link. you will get a 15.- € voucher and me too
Booking.com: The largest selection of hotels, homes, and vacation rentals

Glen, if you want a more spesial trip next year, Hurtigruten does cruises to both Antartica, Island and Svalbard areas just to mention a few, not just up and down the Norwegian coast.
Reactions: glenwilson

Halojs21 said:
Glen, if you want a more spesial trip next year, Hurtigruten does cruises to both Antartica, Island and Svalbard areas just to mention a few, not just up and down the Norwegian coast.
Click to expand...

Thanks for that tip! The irony is that Isobel wants to go Alaska and Norway but.... I'm sure she is part reptile. It can be 25C and she will still turn and say 'is the heating on?' I'm sure she was an extra in the V tv series!

glenwilson said:
Thanks for that tip! The irony is that Isobel wants to go Alaska and Norway but.... I'm sure she is part reptile. It can be 25C and she will still turn and say 'is the heating on?' I'm sure she was an extra in the V tv series!
Click to expand...

isnt that normal with all women, specialy this one who are a bit "skinny". remembering some years back, i was melting and in the sleeping room and sandra was jelling i have to close the window because she is getting cold feet lol

lakaelo said:
isnt that normal with all women, specialy this one who are a bit "skinny". remembering some years back, i was melting and in the sleeping room and sandra was jelling i have to close the window because she is getting cold feet lol
Click to expand...

So true. We were on holiday in Spain and it was hot. Guess who needed a hot water bottle?
You must log in or register to reply here.
Look at the NEW NRU Merchandise Shop to order your own T-bag Coffee Mug or your NRU T-Shirt. Also special Coffee Mug designs for VIPs