Unfortunately no video. It would have had a lot of bleeeps in it anyway. The old letter box (apparently it is called a letter slot now) spring broke so it needed to be replaced. When it was windy it would blow open.

So measured the size and the spacing of the bolts a few times to make sure and then ordered the one below. What should have been a 10 minute job wasn’t. On opening the package there were no bolts and nuts in it. Would normally have returned it but we are going away so didn’t want to leave the old one flapping.

First, removing the old one was the first test. How I had got the nuts on it I have not idea. The gap around the nut was so small I had nothing that would fit. Out came the Dremel and I ground away a small amount of wood and eventually removed the old cover.

The bolts thread into the new one OK but were slightly shorter so a bit more wood was removed. Then discovered the spring mechanism stopped it sitting flush. Tried sanding some wood away but that was going to take a while. Then used a jigsaw to gradually remove some wood. Eventually resorted to using a (wood) router to get a curved area removed.

Then discovered that the holes for the bolts were very slightly too far apart so had to enlarge the holes slightly using a drill.

After three hours I finished. The only power tools I didn’t use were the circular saw and belt sander. I think I used most of the sweary words I know during the process! 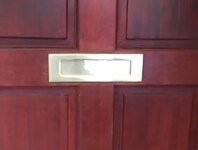 the result looks pretty good for just a fast replacement

At one point I did wonder if it would be easier to just blank that one off and cut a new hole.


At one point I did wonder if it would be easier to just blank that one off and cut a new hole.
Click to expand...

lakaelo said:
would be funny just to put a sticker from a letterslot on it and record the face of the postman when he is trying to put letters in
Click to expand...

You have a real mean streak! (finds large sticker and starts printing)

...its only for science
Reactions: glenwilson
You must log in or register to reply here.
Look at the NEW NRU Merchandise Shop to order your own T-bag Coffee Mug or your NRU T-Shirt. Also special Coffee Mug designs for VIPs