When i tried to join the server today i apparently am banned.
I have no idea why or when this happend.
a admin in the discord mentioned it was for my attitude. and i will admit that i have had some bad moments.
but this all happened before i applied to join the clan which was the main reason i got denied so after that i was working on fixing this.
so i'm very confused and sad.
i would assume i either messed up and said something bad i never intended to say. or one of my comments got interpreted the wrong way.
however i have no idea what happened as i assume i was offline as the ban happend

The banning admin will take a look at your case, please be patient, since this can take some time.

okay i just read the chat log and i think i understand why i got banned.
so i got banned by skybreeder on the 1th of februari for something i said on 29 december.
for saying "get out faggot" which i admit i did indeed say and was indeed wrong of me to say.
i had just been in a hectic situation defending a point with a tank agaisnt 1 lav and about 3 engineers. and when i jumped out to repair my tank someone else took it. so i got blind mad and said the things i said.
as i said i should'nt have said it and i am sorry for saying it.
i got warned and kicked for what i did. and when i calmed down a little i resumed playing and thought that was it.
so what i now don't understand is why i got banned 2 months after this incident? 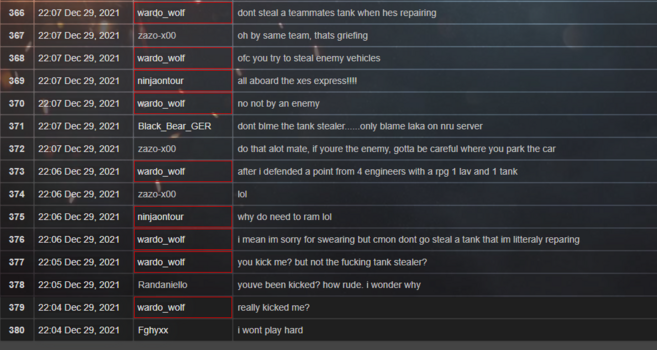 I understand your reaction, truly. I'm sorry for what happened, we are going to have a talk between members about this and give you a feedback as soon as possible, don't get upset
Last edited: 3 Feb 2022
Reactions: Riot_co and zazo

btw. its a timeban and will be automatically lifted in 4 days.
S

Hi Wardo - You're unbanned now. I'll explain the situation properly once I get better, as I am currently unwell. Just wanted to come and apologize for the whole situation. It was a good mixture of misunderstanding and clouded brain-juice at my part. So, I am sorry, and hope to see you ingame soon!
Reactions: Body Bag and Riot_co

okay thank you.
hope you feel better soon.
You must log in or register to reply here.
Look at the NEW NRU Merchandise Shop to order your own T-bag Coffee Mug or your NRU T-Shirt. Also special Coffee Mug designs for VIPs