My GTX670 has just died - probably explains the dropped frames and so on. This was 5 years old (almost to the day). Now I need to search for a new card. I only need something that will do 2560 x 1080 at a decent frame rate but 60fps will do as that is all the monitor is capable of. Probably prefer NVidia but open to AMD.

As the PC has been running just fine I haven't kept up with current graphics cards so any suggestions would be appreciated.

They come in below your budget for a new card.

I installed the quadro card a couple of months ago, running on the second monitor. It still runs BF4 easily, but it's meant for CAD. Drivers were a pain to install to get CAD to recognise the second card but it's working well.

I always go Nvidia just cause of CAD support really.

I recommend 1060 for your usage. It is probably the best card for your performance needs.

Wait two more months for them to hopefully go back to rrp prices now all the minersm have stopped buying them up.

samoz83 said:
Wait two more months for them to hopefully go back to rrp prices now all the minersm have stopped buying them up.
Click to expand...

Would like to wait but it on-board graphics are OK for surfing but it was 12fps on low and 800x600.

Since posting I had a quick look and the 1060 or 1050ti should be OK for what I want and is about £160. It is surprising how much more energy efficient they seem to be compared to my old card which needed a 6pin and an 8 pin power supply. Many of the the 1060/50ti don’t need anything.

Given that the rest of the PC is also about 5years old it may not be worth investing too much at this point. I will have another look and compare the options.

Thanks for the comments and suggestions - really appreciated.

It is all so complicated. The overlaps in product lines is ridiculous. With memory, cores and other variables it is a minefield.

After going through reviews and comparisons I have gone for a 1050ti OC 4GB for £160.

Given the rest of the system is also about 5 years old and the monitor I have, it didn’t seem worth spending £300+ on a card that will not probably show its best. No plans for 4K in the near future either.

It was useful have your views and suggestions and gave me somewhere to start looking. Also realised that I may need to swat up a bit on PC hardware just in case I need to update the mb, CPU and memory at some point.


It was interesting that I had been getting frame drops for about six weeks and had initially thought it was related to the network card being iffy. It may have been a sign that something was not quite right with the card. Taking the card out and reinstalling it would enable the PC to boot and run for a few minutes whereas powering down and restarting wouldn’t. I could still see something through the card but Windows was a very grumpy old Hector. What surprised me was that BF4 even started up. I was expecting it to but it didn’t. It was like watching a stop motion animation though.
Reactions: lakaelo and Redd Tedd

One thing that was really stupid was that initially the 670 was just showing as a generic device and 800x600 was the only option. Went on Nvidia to download drivers and the only have a vertical scroll bar and nothing horizontal so I couldn’t see any options to click ok. I was a bit mr angry at that point. 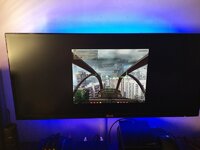 One thing that was really stupid was that initially the 670 was just showing as a generic device and 800x600 was the only option. Went on Nvidia to download drivers and the only have a vertical scroll bar and nothing horizontal so I couldn’t see any options to click ok. I was a bit mr angry at that point.

I feel like i could fix the card if it has no major damage...

Edit: If you are interested to get rid of the card, send it to me for an autopsy xD

Witcheri said:
I feel like i could fix the card if it has no major damage...

Edit: If you are interested to get rid of the card, send it to me for an autopsy xD
Click to expand...

I may have a look at getting the heatsink off to see if a cap has blown or something obvious. Video does pass through it (even though it is just the initial boot sequence anf then windows going hahahaha your screwed). There wasn’t any blue smoke, crackling or flames so it may be just a component giving up.

Booted up, played a bit, then there was a Windows warning chime sound, then the screen went blank.

Could post but the cost is quite stupid. Probably in the £20 range.

I got a 1060 3 Gb on sale about a year ago (can't remember the price but it was "low" and my pc is > six years old so I too didn't want to pay a lot either...) and it works just fine in BF4 with high/ultimate graphics settings. I can watch myself die (frequently) in exquisite detail .
Reactions: glenwilson, lakaelo and Redd Tedd

Still waiting for it to be delivered.

Is it me or does “CUDA cores” sound like something you catch after an inappropriate encounter?

Card arrived at 19:45 last night so not able to install and test it without getting a severe dossof “those looks” the mean you are not a child with a new toy so you are NOT going to do that now.

New card installed and back to widescreen. Getting about 80fps in high and about 60 in ultra. BF4 is still showing low frame rate but not seeing any stutters or any artifacts. 3D score of 8498 so not too bad for the age of the PC and the cost of the card. The old 670 got a score of 6638 for comparison. 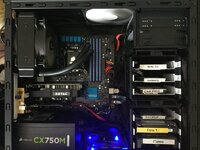 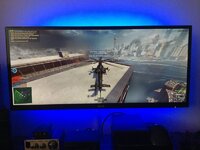 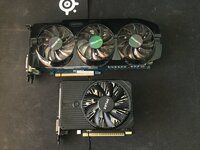 Looks good Glen. Glad you're back.

I'm working for a few days in a remote office on a Citrix based system... man it's like having computer constipation

It's so slow to react to every movement. I have no idea why people opt for cloud based PC environments. I'll be glad to get back to my own box.

...theres no BF4 there either. They all go fecking jogging at lunchtime
Reactions: glenwilson

Really pleased with the card. In game I was getting around 75-80 fps on ultra. Actually looked pretty good. BF1 wasn’t so happy on ultra and it didn’t stop all the abuse in chat and the magic bullets.
Reactions: Redd Tedd

Just ordered one of these. Now I need to:

Actually I will need 2 (1 for backup of the other one) so make #3 above a couple of banks. 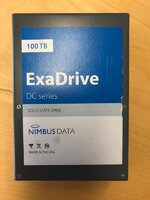 Reactions: lakaelo and Redd Tedd
You must log in or register to reply here.
Look at the NEW NRU Merchandise Shop to order your own T-bag Coffee Mug or your NRU T-Shirt. Also special Coffee Mug designs for VIPs