i know i am a funny. must be because my wife said the same after i bought this stuff. hihi

however, can´t remember where it was but found a video filmed by the dog with a cam on his back. like the idea to film some hiking tracks in the future with the cam on the dog. so easy doing for me because the dog doing all the work.

first i bought a gopro hero ( the basic version ) but as i test it i have to say its just overpriced crap. possibly the hero3 or 4 are better but i am not willing to spend 300.- € just for put the cam on the dog. even more none of the gopro cams have any kind of video stabilizer.
so after some "investigations" i found the sony action cam.

very good value and with a good stabi what means the dog cam looks even better. and all of half the costs of a gopro cam. 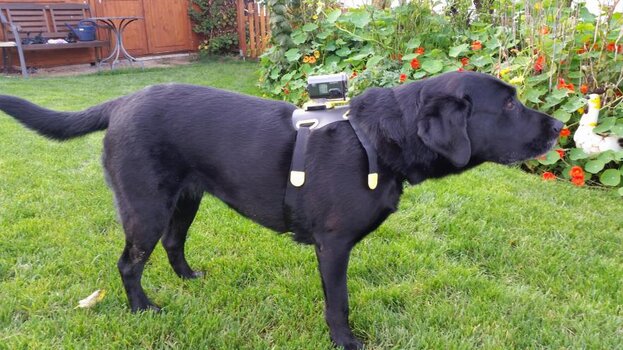 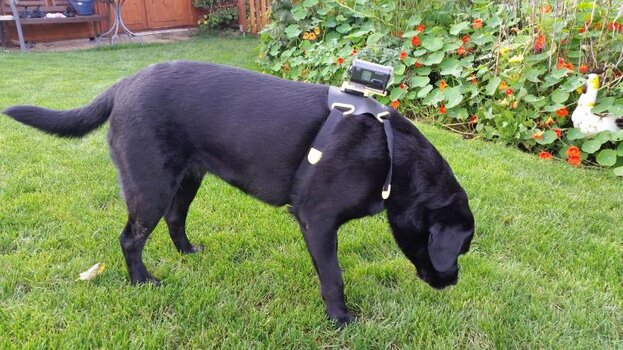 well, they are not completely wrong but who cares.

her is the first try with the cam.

i dont know what version is better? guess with the 170° view you have a big "bullseye" effect but a bigger field of view. i think i like it more with the 120° view but there is will put the cam a bit higher so it can film more over the dogs head.

It’s fascinating to see the world from your labrador’s point of view.

Nice vids, allthough the playing parts are a bit wild, and too much Laka in view:joker:. Found this on GO-PRO: Capture the World From a Dogâ€™s Point of View with GoProâ€™s Fetch. In this vid you see the camera mounted below, I can somehow imagine that that might be a tat more stable by itself already, and also give better clearance for the view.

But must admit.. it's a little crazy, but funny.

Nice videos there sascha
suppose the 170 view is better

Looks like there's a weird tramp in your garden

Lady_Musketeer_GER said:
It’s fascinating to see the world from your labrador’s point of view.
Click to expand...

Sorry Lady but get on your hands and knees to see the same thing !...

A friend of mine did the same thing with his cat : he was very astonished !
[video=youtube;Ky90oZOMvt8]https://www.youtube.com/watch?v=Ky90oZOMvt8[/video]

I guess we are going to see some dog videos from your hiking walks then? Interesting perspective. You could try using a high shutter speed if that is possible and then slow down the video and that would help to reduce shake in the final video.

The ting about the GoPro is that you do need to mount it (OK you gat get off the GoPro now - not THAT sort of mount) to get the best possible shots. I've put a few sticky mounts on the car (which I guess are going to stay on as you have to heat them to get them off again) in different places and am using them to get some stock footage to mix with travel videos. Hand holding the GoPro isn't too bad as long as you are smooth and slow with any movements or panning and I got some decent shots when on holiday doing that. So you could super-glue a mount to the dogs head rather than a silly harness thing and that should give a pretty stable mount!

You can also do image stabilisation in post! Will depend on the amount of movement that you are trying to eradicate though.

You could always use a gimbal system about £50 on ebay (Hot CNC DJI Phantom Brushless Gimbal Camera Mount Motor & Controller for Gopro | eBay) to mount the camera. Then glue the mount and battery pack to the to the dog
and away you go! I'm sure that as the dog's hair grows it will eventually drop off! Obviously you would need to keep the dog in the same place for an hour or so to charge the battery for the gimbal!


Just for the record I was joking about the glue - I would never do anything like that or even use a doggy mount if the dog wasn't happy with it.

Forehead mount! Just to show how it could be mounted on the dogs! I'm sure people will just think I'm being trendy! Once, the glue has cured I will get foreheadcam video uploaded for your viewing satisfaction.

i am of the same opinion that Andy ;-) , very good video laka , waiting for the forest walk

Mount your cat toy on the head, you had a perpetual motion

next try round yesterday. we was "around" our home for a round 3 hours and i made a little 30 minutes video of that. lol

tried it with 120° view and with HQ 1920x1080 30FPS with stabi on. also a bit messing around with adobe preimiere video editor.
still some strange noises. don´t know where it comes from lol but the sound is shit at all with the activity/waterproof case around the cam.

that was the track.
https://goo.gl/maps/q3bvm

The dog cam would be illegal here " Its invading the dogs privacy " LL.

That vid is really quite fun to watch. Would be more interesting with smell-o-vision installed so we could get an idea of what scents are interesting them!

glenwilson said:
That vid is really quite fun to watch. Would be more interesting with smell-o-vision installed so we could get an idea of what scents are interesting them!
Click to expand...

luna is always on a 15m towline at the moment because we have a lot of deers around and she like to run at that. no chance she get one but she try to run behind them. just on that short tour we saw 15 deers beside our way. lol

[video=youtube_share;piysxLbAiVw]http://youtu.be/piysxLbAiVw[/video]
You must log in or register to reply here.
Look at the NEW NRU Merchandise Shop to order your own T-bag Coffee Mug or your NRU T-Shirt. Also special Coffee Mug designs for VIPs