do you have art at home

Well me and Mr.scatha was talking about art today and we ended up talking about what art we like.
Now since I couldn't figure out how to post them to mail from the cellphone I decided to post them here X-D so why don't we make a post out of it and show each other what we have at home. Without further ado, here's what I have at home

Art is a personal thing and one mans masterpiece is someone else's bit of rubbish. You can like something without appreciating the techniques used. Your pictures are quite a contrast! Can't see a lot of the details but I could enjoy them on a wall.


We have a few canvas prints of my photos, an original tryptic (I think that is what it is called) and a few jigsaws Isobel has done that she really likes (Thomas Kincade) plus some prints. I'll do some photos when the light is better. I know that any folk don't think of Kincade as an artist but as I said you like what you like. Art critics can seem such a pretentious lot - someone's unmade bed is "art" but a painting that is popular with the masses isn't "real" art.

Here are a few of my Paintings by Pete rumney they are both originals and as you can see both beach scene's which is some thing I find very calming to look at and tranquil as well.
I do have more but not gonna post them 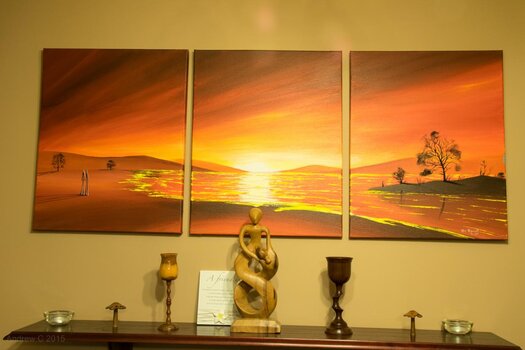 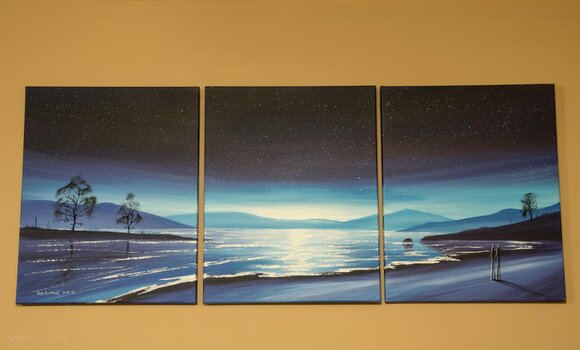 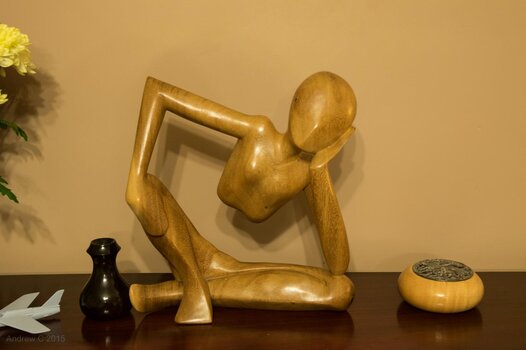 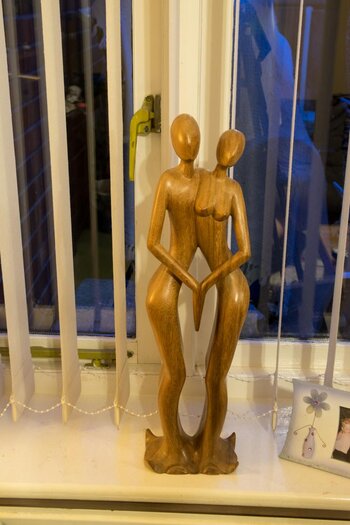 i have a plaster cast of my cock at the nightstand. i will make a pic if the light is better. :joker:

AndyS40 said:
Here are a few of my Paintings by Pete rumney they are both originals and as you can see both beach scene's which is some thing I find very calming to look at and tranquil as well.
I do have more but not gonna post them

definantly mate thats some awsome art i particularly like your Beach Pictures my pieces are also originals however i dont remember what the artist name is, wich is really too bad since i bought them from him personally (ya its been some years but still XD )

lakaelo said:
i have a plaster cast of my cock at the nightstand. i will make a pic if the light is better. :joker:
Click to expand...

You have a zoom lens so it is big enough for us to see then?

Andy, love your pictures. Also like wood carvings as there is something about the way an artists uses a natural resources and that you can pick them up and feel the texture.

Here are some of mine. The three priece abstract is an original and is "out of the way" as my wife hates it. I like it, don't know why though! Horseshoe bend, antelope canyon (the abstract looking one) and the cat are canvas photos. As you can see my wife is an avid collector of teddy bears. Many of these are one-off hand made items that are probably art in their own right. Many originate from Germany but there are many from around the world. They range from about 10mm to 90cm in height, and some are over 70 years old! There are about 500 (that isn't a typo) around the house! Some are very inexpensive and some are not but Isobel will buy them based on if she likes them and not just because they are collectable. They do make the house look a little, er, cluttered and they are absolute bastards to dust but she gets a lot of pleasure from them.

this one is hanging around in our corridor. 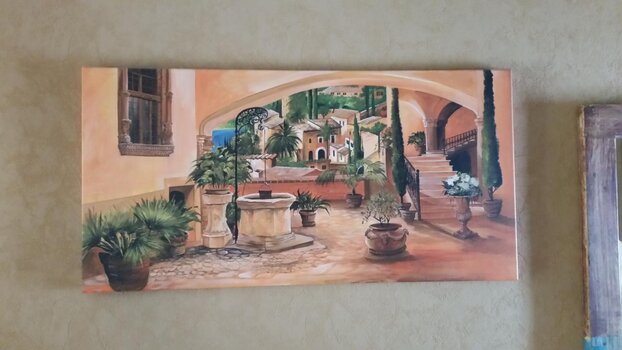 this one is hanging over our couch. 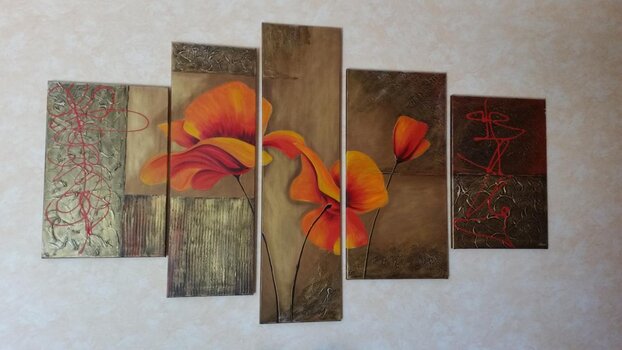 the girl under the pic comes with the pic. must be some kind of bundle that was priceless 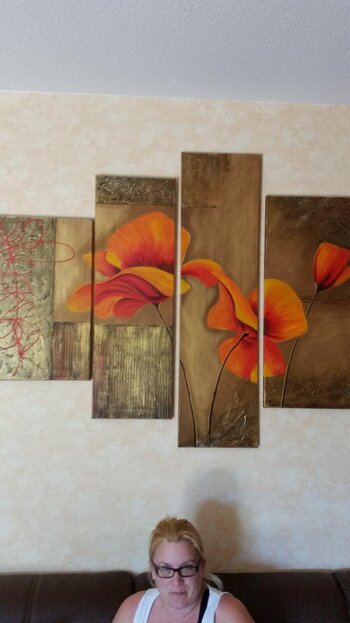 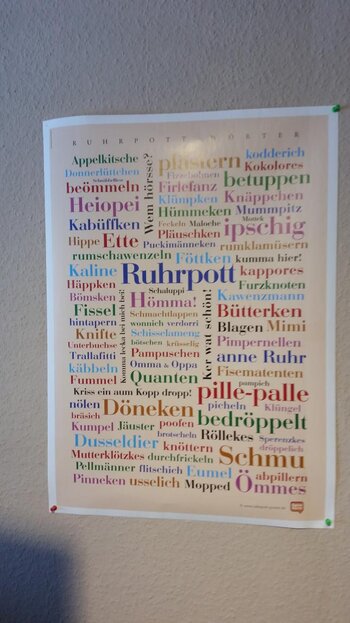 Fascinating seeing the pictures so far. Nothing I've seen would make me go "No/Nein". A lot of the pictures we have up,are of places we like or are from somewhere that has good memories.

glenwilson said:
Fascinating seeing the pictures so far. Nothing I've seen would make me go "No/Nein". A lot of the pictures we have up,are of places we like or are from somewhere that has good memories.
Click to expand...

Then that should be the bedroom

AndyS40 said:
Then that should be the bedroom

Those pictures are on film! Or maybe glass plates!

I like your pics all so far and it is like this indeed...many pics hold a pecial meaning of a place or a mood or a memory for us.

We have a lot of pics in our flat, some people call it crowded but I think nothing gives you more personal insight of people than their pictures in their flats.
Loads of pictures of friends, places, ships etc.

This one I bought on our last cruise. It is an original done by british painter Tim Davies, called Tuk-Tuk around India.
It is one of a kind and he painted it on board before we joined when the ship came from India to Dubai.
My wife liked it from Day 1, but it was not a bargain, which made her reluctantly saying No to it.
While in an unattended moment Mr Bond swept out the cabin when the Missus was on the balcony and made a deal with the art Gallery lady She took it off the auction list, I bought it, I arranged to take it off the ships invoice (so Mrs Sherlock Holmes will not notice the surprise) and made sure it will be sent to my parents so she will not see it before. We had our 10th anniversary and also it was her 30th Birthday, so it holds the memory for me of a great journey and a nice surprise.

Mr Bond, really nice story. If you really like something then it is worth the effort and the cost. Nothing worse than thinking if only I had got that...

AW: Re: do you have art at home

thx for the nice pics to all.

this is art what i love,art of my kids.
first 3 pics are from my son emilio hes 4,and the lego star wars AT-AT is from alexis hes 7 years old.

This being a NRU forum my favourites in our home are these, a peacock and a cock:

Oh, and to balance that up - this (that's too arty perhaps Heikk? ):

Lol Staffan definitely got a bird theme going on here that's both types of birds
You must log in or register to reply here.
Look at the NEW NRU Merchandise Shop to order your own T-bag Coffee Mug or your NRU T-Shirt. Also special Coffee Mug designs for VIPs