We nearly always make our own bread. The exceptions are rolls for burgers, hotdogs and things like that. It is nice to make your own but the effort isn’t worth it. Another exception is German sourdough bread. It will soon be time for the Christmas market it edinburgh and one of the stalls sells German sourdough bread. Yes it is a silly price but it is nice enough to get some as a treat and also freeze some.

Sourdough is my breadmaking nemesis. We used to be able to get some mixes for sourdough and the results were similar to the west coast USA breads but that isn’t available anymore.

Sourdough is made using a starter which acts as the yeast. The bread takes longer to prove than normal yeast based breads but is worth it because of the taste. The starter is basically some flour and water that gets infected with airborne yeasts which you then add more flour and water to feed it and after a week or so the mixture is usable to make bread. You use half and keep the other and add flour and water to build it up again.

I have tried several guides for making the starter including some that use natural live yogurt. Some have been slightly more successful than others but I am going to admit defeat and give up. This flat thing (the round thing that looks more like a mine than a loaf)is the latest effort. It took 2 days to produce that!

It actually tastes OK but I am giving up trying to make sourdough. 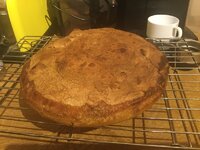 We like the US west coast sourdough breads because it has a unique taste compared to other sourdoughs. The bread above actually tasted a little like that but the starter just doesn't seem to be active enough to get the bread to rise. Even after leaving it two days that was the best it could do.

We can get sourdough breads but some are a lot better than others. Really like the German breads though.
You must log in or register to reply here.
Look at the NEW NRU Merchandise Shop to order your own T-bag Coffee Mug or your NRU T-Shirt. Also special Coffee Mug designs for VIPs