Beer! Or Porter To Be More Precise.

Haven't brewed any beer for a little while mainly because the lack of room to keep it. So thought it was time to build some stocks up. This grain will become a porter style beer which is a hoppy dark style. Need to check the processes and see if I can fit it in befor going on holiday. If not I do it when we get back. Will do some photos and will have some gratuitous slo-mo video too. 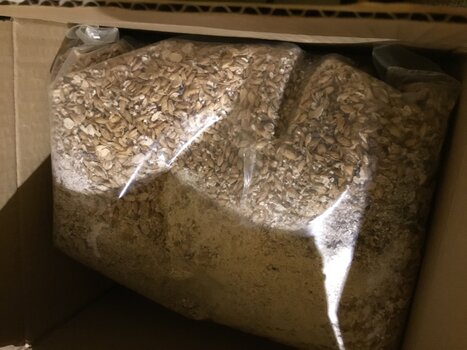 Feel free to send some my way when your done making it!
Reactions: glenwilson

This is a whole grain brew but you can get kits where you skip the mashing and sparging processes by starting with a syrup to which you add water and start at the boiling phase. It isn't cheating but it is easier. I have always done whole grain brewing which is more time consuming but for me is more satisfying knowing that you have created the beer from grain to finished beer. With mass produced beer the grain is used as animal feed, yeast is skimmed off and reused with any excess being used for Marmite production. The grain I end up with is fed to the garden birds but you can use it in breads and other recipes.

This will cost about £2.50 (which is about €2.50 at the moment) a 500ml bottle which is comparable to production craft beer prices here in the U.K.

For genuine lager type beers you really need more control over temperature as different strains of yeast are used whereas beers tend to ferment at room temperature so are easier for home brewers.

Here is the complete process which I will probably do in the next few days and photograph and video.

1. Sterilise all equipment
2. Heat 2l water to 78°C and turn off heat
3. Mashing: Add the grain and stir in. Temp will drop to about 69°C (adjust with cold water or heat as required)
4. Leave for 1 hour (insulate with towels but check temp to make sure the temp remains at 69°C and heat as required).
5. Warm up 5l water to 76°C
6. Remove towels etc and heat the mash to 76°C for 10minutes (known as mashing out)
7. Sparging: remove grain (this was in a net so is quite easy) and place a sieve over the pan and put the grain bag in the seize. Gradually pour the preheated water over the grain. This process ensures all the sugars are removed from the grain. The wort (the liquid produced) can be pored through the grain again.
8. The boil: The wort will now be boiled for an hour. Heat the wort until there is a rolling boil. When a rolling boil is achieved the first batch of hops can be added. After 50 minutes the second batch of hops can be added along with something that helps to keep the beer clear by solidifying any suspended solids from the hops. After 60 minutes remove from heat.
9. Cooling: the resultant wort needs to be cooled as fast as possible to 25°C which is the best temp for adding yeast. (I use ice in the sink and then have cold water running through that).
10. Racking: is the process of moving the wort to the fermenting vessel. This can be done by siphoning or using a jug. You want to get as much liquid as possible but also leave the solids behind. There should be about 4.5l of wort remaining.
11. Pitching: is adding the yeast. Basically open the packet and add to the wort!
12. Fermentation: initially have a jar, 1/3 filled with boiled water and connected with a tube to the fermentation jar. This is in case the foam spills over. Once the initial phase has completed an smaller airlock can be used. When it stops bubbling fermentation has completed. This can take 5-7 days.
13. Bottling: at this point the beer can be bottled. A teaspoon of demerara sugar is added to each bottle. There are other sugars that can be used. The beer is then siphoned into the bottles.
14. Conditioning: the sugar added to the bottles is fermented by the yeast remaining in the liquid and produces CO2 and gases the beer. After 7 days the beer will be drinkable but leaving it for 2 months will be better. During conditioning the beer will be carbonated and the sediment will settle to the bottom of the bottle.

I worked for 7 years in a small family brewery that has a tradition since 1352 and is one of the oldest breweries in Germany.
My favorites are craft beer.

Wardriver said:
I worked for 7 years in a small family brewery that has a tradition since 1352 and is one of the oldest breweries in Germany.
My favorites are craft beer.

What is the name of the brewery. As we will be in Germany tomorrow we can see if we can get some.

When I left school I worked for Watneys in the laboratory - beer we mass produced was horrible and had no character but did give me a love of good beer (as we had to taste test competitors).

My favourite is IPA with citra hops.

Brew day! Was trying to video the brewing process for this porter but not having much luck with cameras and batteries.

Already done the mash which is adding the grain to the 2l hot (78°C) water and leaving it for an hour. After the hour it is reheated up to 78°C for ten minutes. The grain is then washed with 5l 78°C water to make sure all the sugar is out of the grain. We then boil the wort (the water without the grain).

Picture below is the wort just starting to boil. This wort will boil for an hour. After 10 minutes of boiling the first batch of hops is added. These hops are for bitterness as any aromatics are boiled off. After 50 minutes of boiling the second batch of hops is added along with Irish moss. These hops add some bitterness but are mainly for flavour and aroma. The Irish moss is a natural additive that coagulates any solids in the wort from the grain and the hops and during fermentation will settle out to the bottom making the beer clearer.

After the boil it will be cooled to 20°C and have the yeast added. So still a little bit to go. The grain could be used in bread or cooking but we tend to let the garden birds enjoy it. 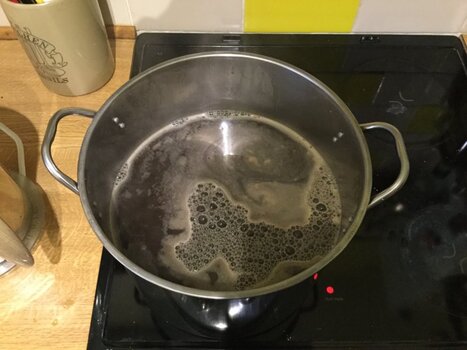 You sure you dont have a drinking problem? lol

No fermentation 6et but soon. Not quite beer yet! 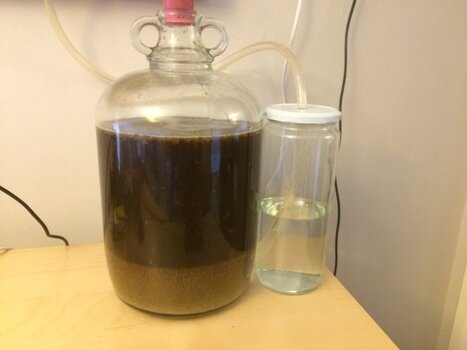 Halojs21 said:
You sure you dont have a drinking problem? lol
Click to expand...

This woman drank 3l water every day and look what happened to her! Yes I like beer, and have a lot of beer. I also like brewing beer too. We have beer about twice a week. Don’t ask about the gin collection though. 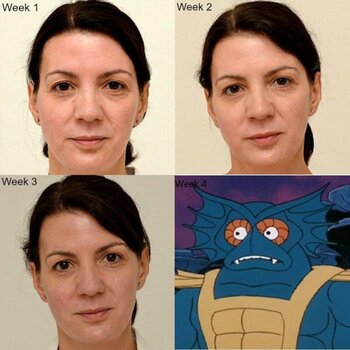 There is still fermentation happening so will be at least another couple of days before bottling can be done. The yeast and solids will gradually drop to the bottom too that should result in a clear beer.

I use clear swing top bottles for my beer as they are easy to use as you don’t need tops. Most commercial beers use brown bottles as it reduces the affect of light on the beer. You can get odd off flavours if exposed to the light. As my beer is stored in the dark that isn’t really a factor. 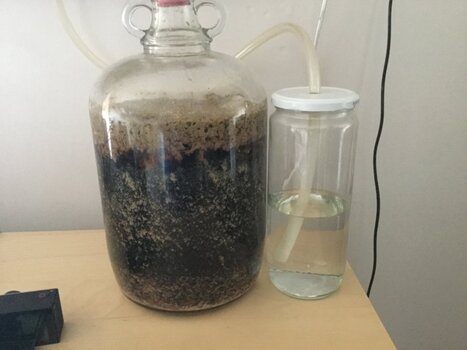 Normally fermentation takes about a week to complete but this porter has taken 2 weeks. This could be due to the room temp or how active the yeast is.

Bottling is the easy part of the process taking the beer and putting it in a bottle. However, the important part is keeping everything sterile as this is the point the beer could be ruined. The bottles are washed and rinsed, the soaked in steriliser and then rinsed and allowed to dry. The beer is then siphoned into the bottles and sugar is added to the bottle. As you can see in the bottom picture the yeast and other solids combine together and helps to produce a clear beer. The beer will still have yeast in it and that will ferment the sugar in the bottles. This has only one function and that is to carbonate the beer and not to increase the alcohol level.

I would normally expect to get about 4l from a batch but this one only produced 3l. That is mainly due to the amount of solids from this beer. So how does it taste? Really not bad. Obviously the beer is flat but it is quite bitter and has some chocolate notes associated with porters. It looks promising but now have to wait about four weeks for the beer to condition in the bottle.

Bottle conditioning just means allowing the beer to ferment and carbonate plus some of the remains solids in suspension to drop to the bottom. So I will update in four weeks with how it tastes. 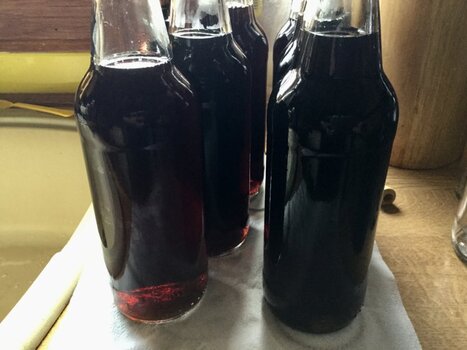 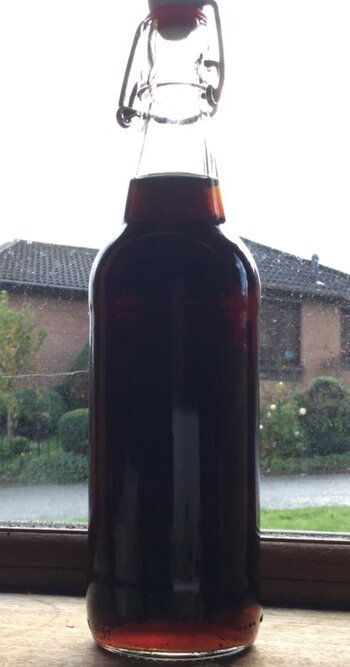 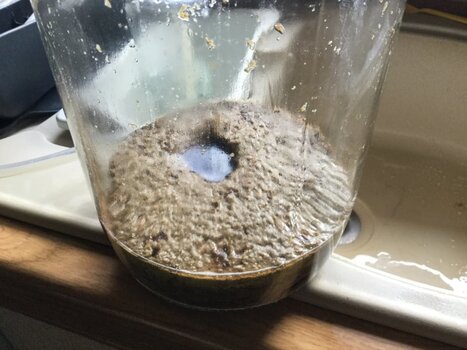 You don’t need much of a darker malt to get the colour darker. I was being lazy with this and got it as a kit. I need to get some malts so I can try some of my own recipes.

I've got myself a brewing kit and will be posting its progress soon
Reactions: lakaelo and glenwilson

Great! What did you get? If you need any help let me know - I'm not an expert but more than willing to help.
Reactions: RIZLOID

Willing to post one. Will need a month to six weeks to condition.
Reactions: FortunaMagica

OK, I know it should be left to condition at least a few weeks longer but I was keen to try it. Despite putting a decent amount of sugar in each bottle it wasn’t as carbonated as I would have expected. Maybe I was too good at getting the solids out!

How does it taste? Has the usual chocolate, smokey and coffee flavours but it also has a decent amount of bitterness and isn’t that sweet like some porters and dark beers. Be interesting to see what it is like nearer Christmas and if it has a bit more carbonation.

It is drinkable so that makes it a success! 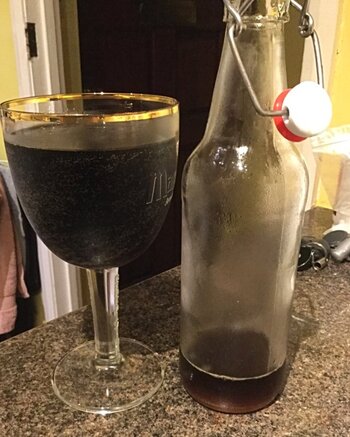 It was. It spent some time in the freezer though just leaving it outside would have done the same job!
You must log in or register to reply here.
Look at the NEW NRU Merchandise Shop to order your own T-bag Coffee Mug or your NRU T-Shirt. Also special Coffee Mug designs for VIPs