I see there are rumours of yet another BF in the pipeline BF0.5

“It is set in the crusade era of around 1095. The initial release will feature the gathering of the armies from across Europe and treking to the near east. Weapons will be swords and there will of course be skins for these ranging from rusty piece of iron up to a shiney polished steel.

Uniforms will, like swords range from rusty chainmail to shiney just out of the shop (possibly with price tag label adornment). If you choose your character to be from Scotland you will have various clan tartan to choose from.

Transport option will include foot, as in walking but upgradeable to oxon, pony, mule and eventually a horse.

Large weapon arrays will include trebuchet which will have various loadouts ranging from rotten vegetables, latrine waste etc to the dead bodies of your comrades.

Combat will be realistic and will be seen in the final DLC package that will be released 2 years after the initial release. This is to ensure that the trek from your chosen homeland will feel like a true struggle and occurs in realtime. If your character succumbs to disease, famine, or some other untimely death on the way you will need to repurchase the game and start again. This is so that the games realistic timescale is adhered to.

Multiplayer experience will include several ‘undocumented features’ that we allways include with new releases. These will be the same ‘issues’ that have been experienced in previous Battlefield games to make you feel truly at home in the new addition to the franchise.

First images of gameplay are below.

See you on the battlefied (probably not).” 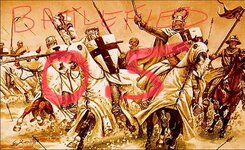 Not a NRU anymore

next Battlefield is Battlefield 3,7mrdBC will be the fight of microorganisms. hard fight in multiplayer or coop. It will be a battle for the evulotion
Last edited: 8 Aug 2018
Reactions: vnutschi and glenwilson
You must log in or register to reply here.
Look at the NEW NRU Merchandise Shop to order your own T-bag Coffee Mug or your NRU T-Shirt. Also special Coffee Mug designs for VIPs