This amused me. They block Battlefield Battlelog (for a game with an 18 certificate) because of “weapons, violence, gore and hate” Yet they allow Twitter and Facebook which are mediums for real hate mongers, propaganda, racists. Yet many kids will have access to them. 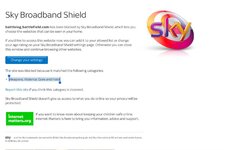 Makes no sense like well 80% of all other decisions nowadays tbh with you...just like deleting diesel cars while trains powered on diesel still work and while ships powered with diesel engines work....also I don't know how could possibly Battlefield be an issue, also GTA V or any other, even if games ''make kids violent'' that's their parents fault, the games clearly have age requirement also I think the biggest issue for violent kids is cuz their parents gave them everything, now when something doesn't go as they want (like almost everything in real life hahah) they overreact like some drama queens and stuff.... :v
Reactions: lakaelo and glenwilson

It is the same in the USA at the moment trying to blame games for school shootings. Most games are cartoon type violence and even in BF you get a bit of blood splatter but you don’t get limbs flying around. I have tried shooting with a shotgun on a range and thought that was fun (and I was quite good). I have never wanted own one though or use one against someone either.

Parents should take responsibility for how they raise their kids. Not being a parent I have no idea how hard that is. It really annoys me when you hear “Don’t do that Beatrice because the train conductor will get annoyed”. They shoud be saying “Don’t do that because it is wrong”.

Same for cars. It is alright for manufacturers to say we are only going to make plug-in electric cars from 20** but howw many charging stations do you see on a motorway service area? Over here you are lucky if there are 4 and most of those have non-electric cars parked in them. And given the price of EVs, even “affordable” ones, how are those batteries going to be made on that scale? How is the current electricity infrastructure going to cope with housholds trying to charge cars?

If you read my 25th February thread then yes I really wished that person a horrible painful death and still do. I admit that at the time I thought of different ways to dispatch him. However I never ever thought about actually doing it.

Weird stuff going on on earth...tbh all those memes back in the day saying that's why aliens don't visit us, well hell yeah now it's 100% sure why they don't visit us hah :v
I'm the type of person, I'll be driving if needed the very last car with diesel/petrol powered engine, if they ever disappear I'll switch to bicycle

It is like the recent thing with flying cars. Your gonna need a pilots licence, and I bet they won’t be electric powered. And I would never get in one even if it was an Uber.

But all good points naturally.
You must log in or register to reply here.
Look at the NEW NRU Merchandise Shop to order your own T-bag Coffee Mug or your NRU T-Shirt. Also special Coffee Mug designs for VIPs