A Small But Good And Sexy Video Hah

Here it is. After 5 Months, 5 long Months, finally managed to make some stuff Thanks <3

very nice video and i like the music.
Reactions: AndrejBosnaBVB

beautiful end sequence and you landed the musicality with the flying body on the dramatic beat!

Gave me a chubby
Reactions: AndrejBosnaBVB

Thanks guys <3!
I liked the music too, but got a copyright claim instantly hahah :v

Great job editing that! What softwares did you use? Also video itself looks great too...!
Reactions: AndrejBosnaBVB

Not a NRU anymore

Video editing can take a lot time and requires an artistic eye (which I would never claim to have). Even doing holiday videos can take weeks just getting it down to useable length. So easy to leave bits in that you like but doesn’t add to the video. Totally impressed by the video.

YouTube copyright is annoying to say the least. I generally use my own creations or music that is definitely copyright free as it save a lot of hassle. I have created music using loops in Logic and had claims filed because someone had used the same loop in their song. The licensing agreement in Logic specifically says if you use any loop the music is a derivative and therefore cannot be copyrighted. Never lost an appeal when quoting the Apple Logic EULA and the specific sections.

I am against the abuse of copyrighted materials (hehe Knutcraker) but I also think that some of the claims made are just automated cash machines. Some of the songs that I “copied” were a joke - maybe I used a C# note and they claim that is an infringement. They are just as bad as patent trolls.<steps off soap box>
Reactions: AndrejBosnaBVB

Yea, it can take some time especially if I haven't used something for a while and then I start again, I basically don't know where everything is hahah the same goes for photoshop
I respect everyone and ofc I respect their work, but since my YT channel doesn't have enough subs for any kind of monetization, , even in this, it's not even the full song tho, I copied the same part and played it over and over again, but still the YouTube works well, they claim my video and even if I earn any money, like it used to be before they changed the requirement to be monetized, the money goes to the song owner, so I think that's fair and I have nothing against that ^^

Also what I think is that you can do a lot of good cinematic shots tho, bf4 is a great looking game, and it would be possible, just EA doesn't really like it,since the file is a .dll which is being inserted into the game, so it has to be done on servers which are unranked, and punkbuster has to be off, just like fairfight too...it takes some time tho

I have tried getting shots when spectating but trying to get a slow pan or move in for a closer shot is very hard. One minute everything is going well and then you are suddenly at the other side of the map!

The trouble with YouTube isn’t that people use copyrighted music. The amount an artist gets when you legally stream a track is miniscule. As you say, unless you are a pro Youtubber they are not going to get any income if any off a video you or I do. Wouldn’t surprise me if Google keeps most of it any way when they add ads to it.

It is a shame there isn’t and viable alternative to YouTube.

Anyway, you have created something that looks really cinematic and really captures the atmosphere of the game too. You should try and do the same for BF1 Snipers shooting from one side of the map wont be so interesting though.
Reactions: AndrejBosnaBVB

Currently trying to do some more stuff for bf4, also I'm not sure do these tools work for bf1, but firstly I have to download bf1 to my PC, I don't have it installed now :v 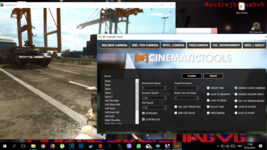